In recent years, the income to farms from milk has increased as have the costs of production. The Irish farming and agri- business sectors are now working towards a 50 per cent increase in milk supply by 2020, arising from the lifting of EU milk production quotas.
This presents an enormous economic development opportunity for the farming and agri-business sectors and for all agricultural/rural counties. This is the most significant economic development opportunity for agricultural/rural counties in decades. It will also impact positively on rural towns and villages.

A study carried out for Glanbia in 2012 by Ernst and Young/UCC found that the economic value of milk expansion in the Glanbia catchment (mainly the south east and east) where a 60 per cent increase in milk supply is planned, would rise from €1.5 billion in 2011 to €2 billion in 2020. This would lead to an increase in employment from 5,500 to 7,500 full-time equivalents - an increase of some 2,000 jobs.
Similar expansion plans are being progressed by Dairygold in the south and by other milk processing companies across the country on a pro-rata basis. Aurivo, formerly Connacht Gold, is planning for a 30 per cent expansion in the west and north-west.
It is expected that there will be further expansions post 2020. Significantly the bulk of this processing is for export, with outputs including dried milk, nutritional supplements, infant formula, health and sports supplements, cheeses, butter etc.
Milk (and beef) expansion ticks all the key boxes in relation to economic best practice as an indigenous sector, producing high quality products for export markets, with high value added, and indigenous ownership of profits, with good regional/ local dispersal of income and of profits.
Expansion plans are also in place for beef under Food Harvest 2020 with a current output value of €1.9 billion, with plans for a 20 per cent expansion in output value by 2020.
It is more than evident that milk and beef expansion generally and food production
particularly is a major economic growth path for agricultural/rural counties, and that new approaches and partnerships are necessary to ensure that this growth is captured. 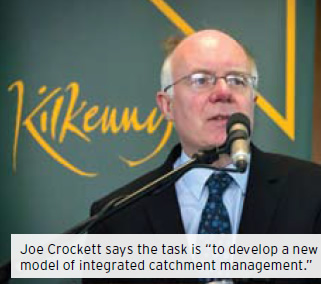 Therefore, it is suggested that agriculture and agri-business should now form part of economic planning both at county and at regional level.
It is also important that agricultural/ rural counties embrace the economic possibilities, support the expansion and help to remove/mitigate the risks attached to the expansion.
All economic expansion paths contain external and internal risks and in relation to agri-expansion a significant business risk which must be overcome is the risk to water quality. In the past, as a society we have tended to regard water quality as a public health or an environmental issue but we must now view it as an economic asset and as an economic risk factor which must be better managed if the economic opportunities of milk and beef expansion are not damaged.

All large scale international buyers of Irish food are now insisting as a contractual requirement, that there is credible evidence of good environmental performance from the farm to the factory to the customer/ consumer.
Increasingly, buyers are also looking for good environmental performance on the farm, as a contractual requirement, and this is driving the different quality assurance schemes that the state and the food sector have been developing and promoting. It is understood from industry sources that this trend will intensify.

GOOD WATER STATUS
Parallel to this, the legal requirement on the state and on society to achieve good water status under the Water Framework Directive by 2021 is a significant legal requirement. Similarly, the maintenance of the nitrates derogation currently under periodic examination by the EU Commission is a critical requirement for farmers, for agri- business and for milk expansion.
With the expansion of cow herd numbers as part of dairy expansion particularly, and notwithstanding productivity gains per animal due to genetic improvements and conversion of animals from beef to milk, it is clear that new pressures will arise for water quality because of increased cow numbers.

COMMERCIAL BEST PRACTICE
It is suggested that a new collaborative business model (or models) is needed to meet and achieve EU water framework and nitrates requirements, and international buyer requirements into the future, and that this should be participative of and be driven by the principal economic/business interests involved.
This could involve the milk and beef processing companies, and the economic producers (i.e farmers and their representatives, supported by the relevant state agencies such as Teagasc, local authorities, Leader, EPA, government departments and Irish Water) at national and local level.
The task is to develop a new model of integrated catchment management which will improve water quality standards and levels of performance, year on year to 2021 and to demonstrate commercial and environmental best practice.
Side by side with this, local authorities and communities and Irish Water, as part of the integrated model, should examine and mitigate the environmental impact of waste water infrastructure, both public and private. In so doing, more of the economic assimilative capacity of the environment in rural areas can be reserved for agriculture as an economic development measure while at the same time raising standards and environmental performance.
It is suggested that this collaborative change model, rather than an enforcement only model, presents the best possibility of success to change cultures, behaviours and outcomes so as to achieve economic and environmental success. Agri-economic and environmental success are now irrevocably inter-twined.

BACKGROUND TO PLAN
In 2010, the elected members of Kilkenny County and Borough Councils approved an economic development plan for Kilkenny, which identified agri-business as an objective and path to economic development.
Subsequently a Working Group of Senior Executives of a number of major agri-business companies was established which identified two paths to agri-business growth. One was expansion of the milk supply as part of Food Harvest 2020, and the second was support for food SMEs to improve marketing and distribution in the UK.
Arising from the deliberations of the Working Group of Senior Executives, it was agreed to establish a Scientific Working Group drawn from the relevant state agencies to model for Kilkenny, as a test case, the growth in cow herd numbers arising from milk expansion, and to model the impacts on water quality
In October 2012, the Scientific Working Group recommended that a concerted/collaborative approach would be needed, involving agri-industry, local authorities, Teagasc, farmers and farm bodies, and community groups as a means of achieving both of these objectives. It also made a number of other detailed recommendations.