The main objective of the Fire Service is to provide for the safety of persons and buildings both new and existing by way of fire prevention and also by operational response in the case of fire or accident.

The Fire Service carries out its functions under these main headings:

This is a monitoring and regulatory role for the Council relating to inspections, recommendations and actions in respect of existing and proposed buildings.
The role is carried out through its input into the planning function, processing Fire Safety Certificates under the Building Control Act and associated Regulations and inspection of existing buildings under the Fire Services Acts 1981 & 2003 and the Licensing Acts.
The Council as fire authority also has a role in relation to the inspection and licensing of retail petroleum stations and bulk petrol distribution stores under the Dangerous Substance Act, 1972. Secondly, the Council also has a role in relation to the monitoring of volatile organic compounds (V.O.C.'s) emissions at petrol stations under the Air Pollution Act (Petroleum Vapour Emissions) Regulations 1997.

This relates to the fire authority responding quickly and efficiently to fires and other emergencies throughout the county. This response consists of a pre-determined turnout of appliances and equipment based on the nature, magnitude and severity of the incident. Turnout involves the mobilisation of the fire-fighting crews and the appropriate fire appliances.
Kilkenny County Council adopted the Fire and Emergency Operations Plan 2015 - 2020 on the 23rd March, 2015.
The purpose of this plan is to fulfil Kilkenny County Councils statutory obligation as a Fire Authority as outlined in Section 26 of the Fire Services Acts, 1981 & 2003. This plan details current arrangements within the Fire Authority, but it also sets out strategic plans and targets for the Fire Authority for the next 5 years.
- Fire and Emergency Operation Plan 2015 - 2020

The purpose of the fire operations section of the fire authority is to respond quickly and efficiently to fires and other emergencies throughout the County. This response consists of a pre-determined turnout of appliances and equipment based on the nature, magnitude and severity of the incident. Turnout involves the mobilisation of the fire-fighting crews and the appropriate fire appliances.

How hot is fire?

Everyone knows that it is hot, but just how hot can it be? Room temperatures in a fire can range from 100 degrees at floor level, all the way up to 600 degrees at eye level. A fires heat alone is enough to kill, this heat can scorch your lungs in one single breath while melting your clothes to your skin. In only 5 minutes a fire can become so hot and intense that a flashover occurs which will simultaneously ignite everything in the room. A fires heat is much more threatening than the flames themselves. 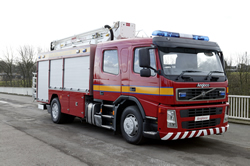