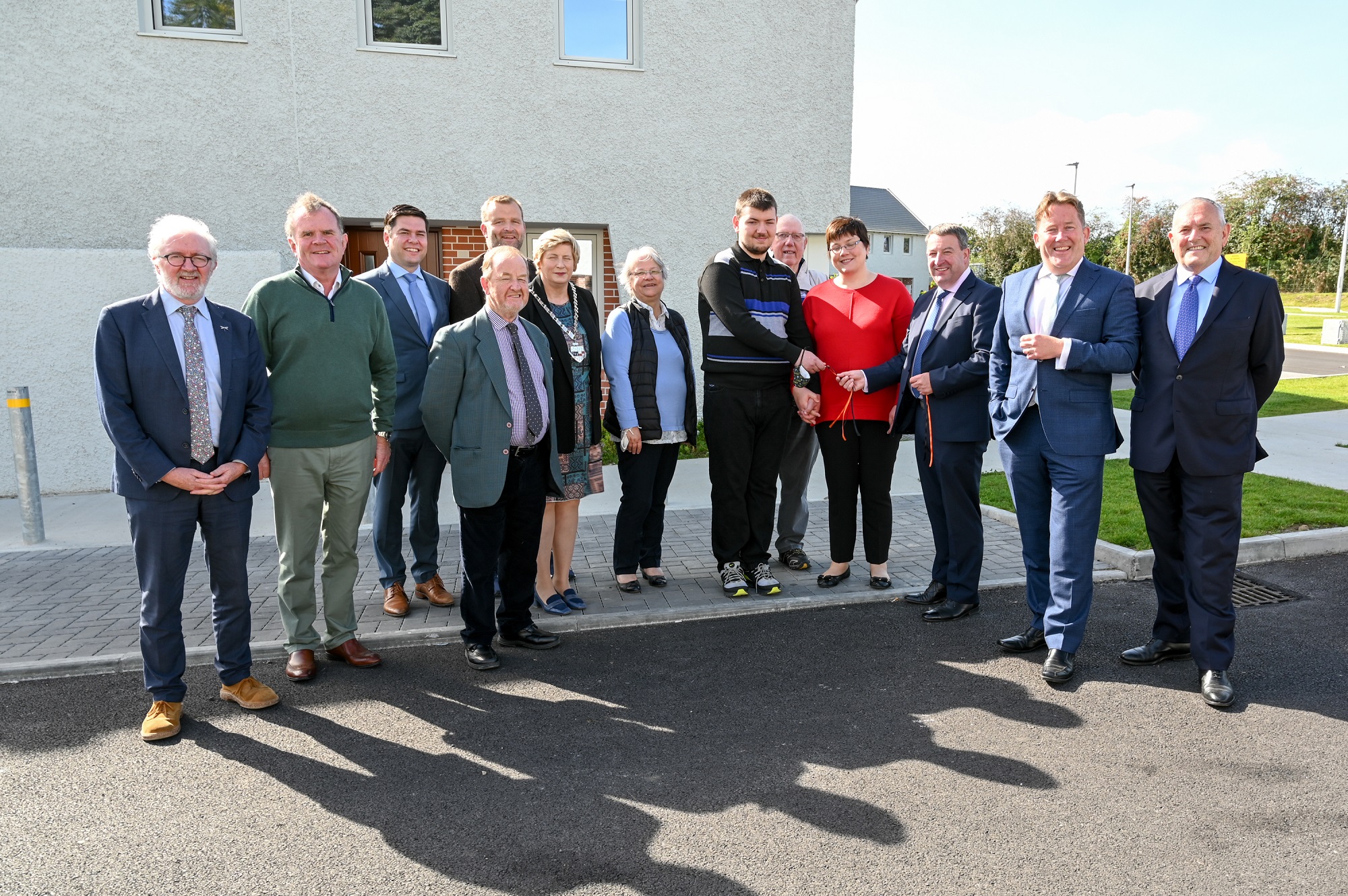 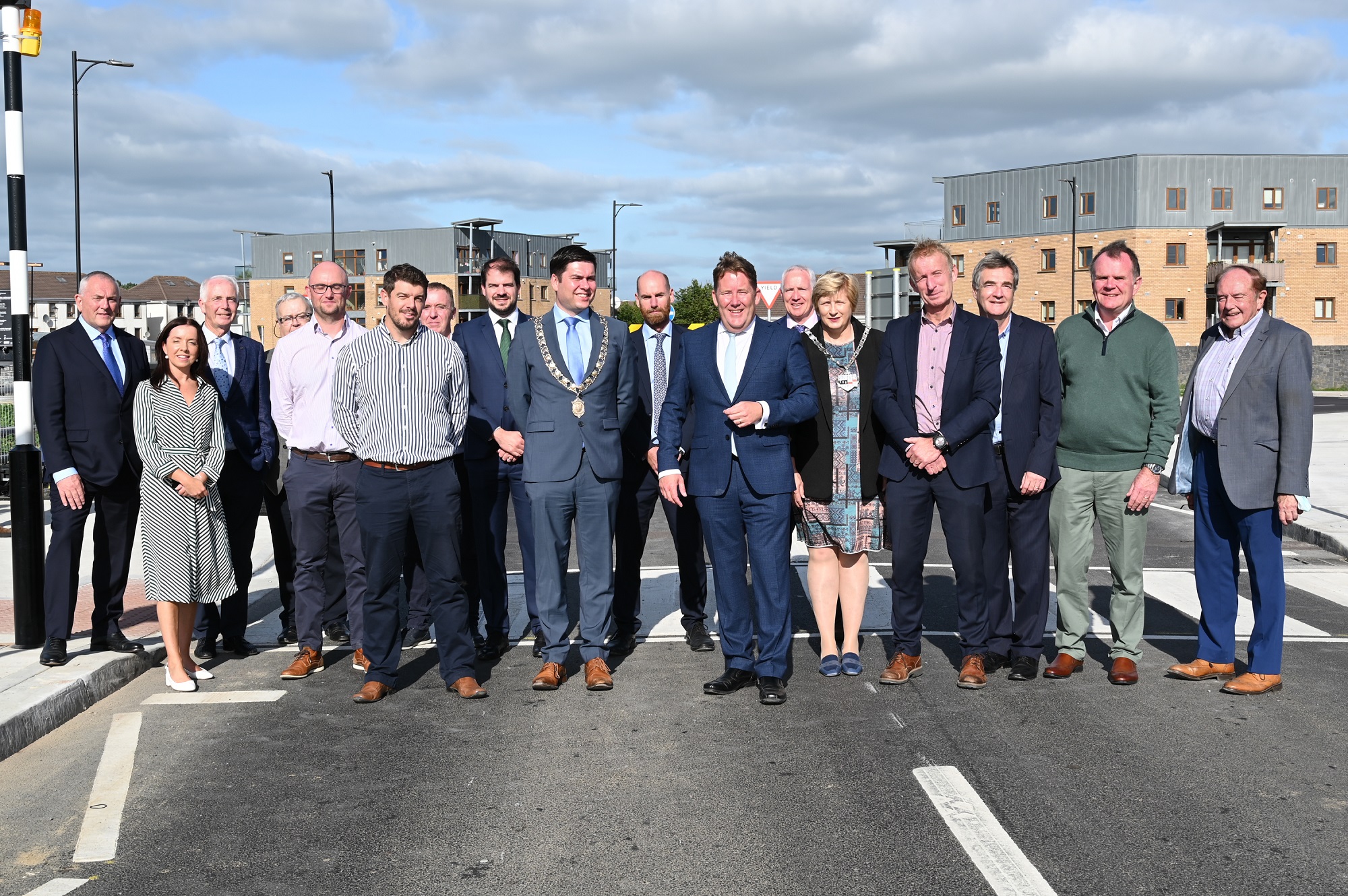 Minister for Housing, Local Government and Heritage, Deputy Darragh O’Brien, T.D., visited Kilkenny yesterday to officially open a number of social housing developments.  Following the recent launch of the Government’s new “Housing For All” Plan, Minister O’Brien joined Cathaoirleach of Kilkenny, Cllr. Fidelis Doherty and Cathaoirleach of the Castlecomer Municipal District Cllr. Pat Fitzpatrick at Glebeside, Castlecomer to mark the official opening of 33 new homes there. New tenants Mai and Conor Lacey were delighted to meet Minister O’Brien and welcomed him to their new home.

Speaking at Glebeside, Cathaoirleach Cllr. Fidelis Doherty remarked that “Kilkenny County Council has been led by housing demand in preparing and delivering projects in our County towns, where people want to live and where they will sustain our schools, shops, clubs and services.”

New housing developments have been provided in many rural towns and villages in recent months as well as in Kilkenny City and the delivery pipeline for housing will deliver many more homes over the next five years.

Minister Darragh O’Brien was joined during the day by Mayor of Kilkenny Municipal District, Cllr. Andrew McGuinness and Minister of State for Heritage and Electoral Reform, Deputy Malcom Noonan, T.D., at the opening of 18 apartments at Pairc Nua, Castlecomer Road, Kilkenny and 40 homes at Seville Rise, Callan Road, Kilkenny.

Following the above, Minister O’Brien moved on to open the new Kilkenny Western Environs Phase 1 Infrastructure Road scheme (now known as the Breagagh Valley). This new road will service an area of 140 hectares (350 acres) of land zoned for housing, schools and social infrastructure in a location within easy reach of Kilkenny City Centre.  Resulting from the investment in this project by Kilkenny County Council and the Department of Housing, Local Government and Heritage, it is expected that over the next 3-5 years approximately 1000 housing units will be provided, with sufficient infrastructure in place in the area to support the construction of a total of approximately 3000 housing units, leading in time to the alleviation of housing supply issues currently being experienced in Kilkenny City.

Acknowledging the hard work of local authorities and approved housing bodies in delivering high quality homes for families, in their communities, Minister O’Brien outlined the ambitious targets set by the “Housing For All” plan which represents “the largest ever housing budget in the history of the State to transform our housing system, with in excess of €20bn in funding through the Exchequer over the next five years”.  As part of this plan Kilkenny County Council will deliver 803 new social houses, over the next five years.

Commenting on the day Minister O’Brien said, “I was delighted to visit Kilkenny and to see first-hand the number of housing projects which are currently in development. Having just launched ‘Housing for All’, the Government’s new housing plan for Ireland, it’s particularly exciting to see a wide range of projects which will provide much needed homes for people.”

Welcoming the presence of Minister O’Brien to acknowledge the successful delivery of housing in Kilkenny, Director of Services, Mary Mulholland, remarked on the “dedication and hard work” of the staff in the Housing Department resulting in real housing solutions for many families and individuals and looked forward to delivering more homes and supports to as many as possible over the lifetime of the Housing For All plan.