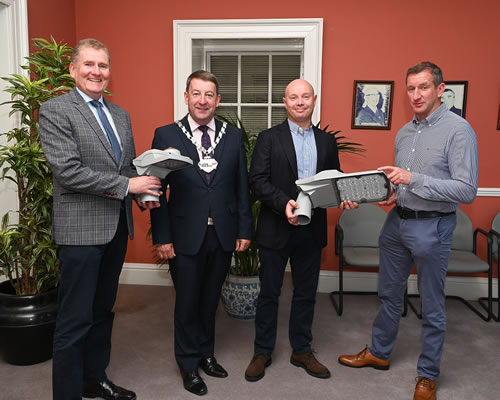 Local authorities are committed to leading on climate action, reducing carbon emissions in our operations and meeting our energy efficiency targets. This project takes a big step in that direction as public lighting currently accounts for half of all the energy used by local authorities. Retrofitting public lighting to LED is not only good for the planet, it will also save us up to 55% on our energy and maintenance costs, while improving light quality. Advancements in LED technology allow for an improved visual environment, enhanced public safety and reduced light pollution.”

Twenty-one Local Authorities are collaborating in the National Public lighting Energy Efficiency Project (PLEEP), coordinated by the Roads Management Office (RMO), to retrofit approximately 205,000 public lights to LED. Once complete, the project is set to reduce CO2 emissions by 20,000 tonnes each year, reduce energy and maintenance costs by 55% while saving the local authorities €12m in energy and maintenance costs annually.

The project is being directly funded by local Authorities with additional financial support from the Governments Climate Action Fund and Transport Infrastructure Ireland. Technical assistances services have been funded in part by the European Local Assistance Facility, ELENA set up by the European Investment Bank (EIB).

The project is being rolled out on a regional basis with a Lead Authority managing the roll out in each of the 3 regions. Each region will appoint a contractor to undertake the retrofit, following a tender process.

Kilkenny County Council is proud to lead the second phase of the National Public Lighting Energy Efficiency Project for the Eastern Region, with the 1st phase having already commended in the South West Region with Cork County Council as the lead Authority in that region.