The first Chief Fire Officer of the A.F-S. in 1940 was Mr. Dan Barry, A.C.E. He was given the full responsibility for the three services in the A.R.P. His two assistant engineers were detailed by him to take charge of the Rescue Service and the Decontamination Service. When Mr. Dan Barry went about recruiting his men he looked for men from all walks of life such as an Electrician, a Plumber, a Mechanic and a Radio man. All these skills are useful in firefighting. The first A.F.S. men recruited were: Mr. Dan Murphy; Mr. Jack Murphy; Mr. L. Lynch; Mr. M. O'Brien; Mr. P. Tyne; Mr. J. Cullen; Mr. J. Duffy; Mr. M. O'Neil; Mr. P. O'Neil; Mr. J. Dealy; Mr. J. Connolly; Mr. T. Connolly and Mr. J. Goran. That was the fire crew in Kilkenny City from 1940 - 1945. 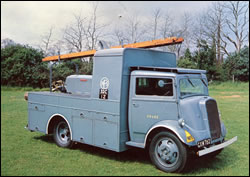 The Fordson tender was classed as a "Heavy duty mobile unit". It took six men to operate it. This appliance was powered by a Ford V8 petrol engine.

In mid-1940 the first motorised fire engine arrived in Kilkenny City . It was a Fordson tender and trailer pump. Previous tc 1939 Kilkenny City Fire Service was run by Kilkenny City Corporation. It consisted of a hose and ladder unit. It was housed in the Town Hall. It was a hand cart which was pulled by four men. It's equipment consisted of a ladder, a hand pump, hoses and other pieces of firefighting equipment. The A.F.S. and its new Fordson Tender was a big improvement on the hose and ladder unit which was Kilkenny's fire service up until 1940. The Irish Government, in late 1939 and early 1940, bought a number of these Engines from the English Government to equip the A.F.S, throughout Ireland.

When the A.F.S. received their engine from the War Department it was painted drab grey but was later painted red. The Fordson Tender and Trailer Pump was housed at the County Council yard in Dean Street where Mr. Dan Murphy and his son, Jack, lived as caretakers in the A.F.S. headquarters within the council yard. All emergency calls came to Mr. Dan Murphy's house. Mr. Dan Murphy was also the driver-mechanic of the Fordson Tender. The phone number for the A.F.S. Headquarters was: Kilkenny 202. In the event of a fire call Dan Murphy alerted the crew by sending Jack in the call-out van around to all the firemen's houses to collect them and bring them back to the Council Yard where they would assemble and proceed to the fire. This was the same method in all our major towns and cities as they had no siren system.

The rear pump was powered by a 4 cylinder petrol engine which had an output of 500 gallons per minute (G.P.M,). It's trailer pump was a sulzer V8 and it also had an output of 500 G.P.M. A trailer pump can be brought down to a river or pond where it can pump water by means of a 2.5 inch hose back to the main appliance. These hoses were 75 foot long.Another way of obtaining water is by the hydrant system in Kilkenny City. In 1911 when Kilkenny Corporation laid its first sewerage system it also installed a hydrant system. A Hydrant System is a network of 4 inch pipes which run under the city and carry water to hydrants within the town. Hydrants can be found along footpaths. They are recognisable by a black H on a white background which tells the firemen where they are. Part of the equipment which the fire engine carries is a standpipe, key and bar. In the event of water being needed at a fire (which is most of the time) the standpipe is screwed down onto the hydrant and then the hose run back to the appliance and the pump turned on.

The ladder carried on the Fordson Tender was a 35 foot ajax ladder. They carried 16 lengths of 2.5 inch white canvas hose.They also carried 4 nozzles, a shovel, pick-axe and other pieces of firefighting equipment. When the Fordson Tender was on its way to a fire its only means of letting people know it was coming was by a bell mounted on the roof which was rang by a fireman from inside the cab.