When Mr. T.P. O' Brien came in 1951 the fire service was still operating from Dean Street with their Fordson Tender and trailer pump. He proceeded to recruit firemen and build a new Fire Station on the Gaol Road. He also bought a new fire engine.

This engine was a Dennis Pump escape (P.E.) It arrived in August 1953 at a price of £5,431. This engine carried 100 gallons of water on board which meant that when the firemen arrived at the scene of a fire they could start work right away. It also carried a 50 foot escape ladder, 20 - 2.5 inch white canvas hose and other equipment. It had a 1000 gpm pump midship mounted. The P.E. replaced the Fordson tender which was then sold to Waterford City Fire Service. The P.E. was housed in Dean Street until the new fire station was completed in late 1953.

The new station was a two-bay station. It had a watch room, a meeting room, toilets, showers and a store room. Upstairs was living quarters for fireman Lonergan and his family. Fireman Lonergan maintained the P.E. and manned the phones.

In 1953 the siren was removed from the Courthouse and a new one placed on the roof of the fire station.

The firemen and officers of the 1955 Fire Service were:- 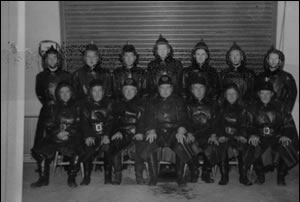 Between 1953 and 1955 Fire Chief O'Brien built fire stations in Callan, Thomastown, Castlecomer, Freshford and Graiguenamanagh and equipped them with large Commer Vans and Trailer Pumps. These vans were a vast improvement on the old system of hiring a car to pull the trailer pump to a fire. The van carried all equipment needed and the fire crew.

All these stations had one officer, one driver and three firemen. In the event of a fire a person would have to go to the fire station and press a button which was outside the station. This would set off a siren mounted on the roof. This siren would indicate to the firemen that there was a fire and they would go to the fire station. The reason for this was that there were no phones installed in the stations until later years.

In 1957 Fire Chief O' Brien thought it necessary for Kilkenny City to have a second engine. His choice was a 1957 Karrier water tender, equipped with 400 gallons of water and a 500 gpm pump. This engine was known to all the firemen as CIP 160 and still is to the present day*

In 1962 Kilkenny City Fire Service attended a large fire in Kilkenny's largest woollen mills, the Greenvale woollen mills on the Bleach Road. This fire destroyed most of the building and left many out of work. This fire was fire chief O' Brien' s last major fire because in late 1962 he took up the appointment of Chief Fire Officer for Dublin City where he stayed until his death in 1982. Dublin Fire Service Training Centre is named after him, the O' Brien Institute (O.B.I.). 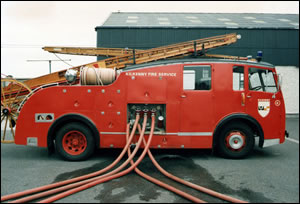 The P.E. still in working order but not used for firefighting.