The Start of Part-Time Fire Service

Most of the A.F.S. firefighters united their role in the City and County Fire Service, still using their Fordson Tender and trailer pump and still housing it in Dean Street. This service was jointly run by Kilkenny Corporation and County Council.

The County had five outside stations. These were in Castlecomer, Graiguenamanagh, Thomastown, Callan and Piltown. Each station had 5 firemen and their equipment consisted of a trailer pump, standpipes, hoses, nozzles and ladders. In the event of a fire the trailer pump was pulled by the station officer's car or a taxi. The call-out system was the same in Kilkenny City and County in 1946 as it was during the war years with the A.F.S. unit

In 1948 Kilkenny City had expanded a lot since 1940 and fires were more frequent. Also firemen were living further away from the station and it took longer to contact them and bring the men to the station. It was then necessary to install a siren on the roof of the Courthouse. This siren was rung from inside the Courthouse. There was also a button outside the Courthouse and if a fire was spotted, any member of the public could press this button and set off the siren. All the firemen would report to the Courthouse and the person who rang the siren would tell the firemen where the fire was. They would then go to Dean Street and collect the Fordson Tender and trailer pump.

Also in 1948, three bells were installed into three firemen's houses. These firemen were:

The switch for these bells was in Mr. Dan Murphy's house in 25 Dean Street. These bells would ensure a very efficient call-out at night. It was the post-office's job to install the overhead wires for these bells.

The following are some sample Fire Reports and their content.

At 6.35am on the morning of the 19th February 1946 Kilkenny City Fire Service received a call from the Military Barracks stating that there was a fire in the vicinity. The fire was in th Protestant School on the Castlecomer Road. Here follows a report written by the Fire Chief: 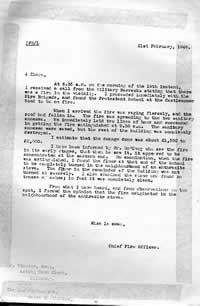 At 6.35am on the morning of the 19th instant I received a call from the Military Barracks stating that there was a fire in the vicinity. I proceeded immediately with the Fire Brigade, and found the Protestant School at the Castlecomer Road to be on fire.

When I arrived the fire was raging fiercely, and the roof had fallen in. The fire was spreading to the two sanitary annexes We immediately laid two lines of hose and succeeded in getting the fire extinguished at 9.50am. The sanitary annexes were saved, but the rest of the building was completely destroyed.

I have been informed by Mr. McEvoy (who saw the fire in its early stages) that when he saw it, it appeared to be concentrated at the eastern end. On examination, when the fire was extinguished, I found the floor at that end of the School to be completely burned in the neighbourhood of an anthracite stove The floor in the remainder of the building was not burned so severely. I also examined the stove and found no traces of ashes; in fact it was completely clean.

From what I have heard and from observations on the spot,I formed the opinion that the fire originated in the neighbourhood of the anthracite stove.

One of the biggest fires known to Kilkenny City Fire Service was at Delehanty's, High Street. On Thursday, 9th of May, 1946, a fire was reported to Mr. Dan Murphy, Station Officer, stating that Delehanty's of High Street was on fire. The following was written by the Fire Chief:

I beg to report that I received a fire call on Thursday the 9th instant from Messrs. Smithwick's, High Street at 5.28 am.

I immediately summoned the Members of the Fire Brigade by Telephone and Messenger. We proceeded to High Street with the self-propelled heavy pump and a trailer Pump. I found Delehanty's Premises ablaze and portion of the front had collapsed. Mr. J. Council's premises were also on fire and Smithwick's was in grave danger.

The heavy pump was connected to a hydrant in front of the Post Office. Two lines of hose were laid to the rear of Messrs. 0' Councils and Delehanty's and two lines were laid in front. Pumping was started at 5.45 am.

Immediately afterwards the trainer pump was connected to a hydrant at James ' Street corner and two lines of hose were laid through Smithwick's premises on the top floor and ground floor.

The fire was got under control at about 7.30 am.

A further outbreak occurred at the rear of Delehanty's Cycle Works at about 7.20 am. This was promptly dealt with.

It was necessary to continue pumping operations throughout the day and firemen were on duty until 10 pm.

I would like to mention that the men worked extremely hard and that invaluable help was received from members of the Garda Siochana and the public. 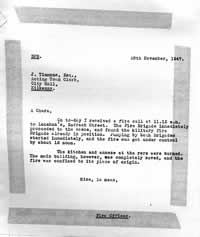 On today I received a fire call at 11.12 am to Lenehan's of Barrack Street. The Fire Brigade immediately proceeded to the scene and found the Military Fire Brigade already in position. Pumping by both Brigades started immediately and the fire was got under control by about 12 noon.

The kitchen and annexe at the rear were burned. The main building, however, was completely saved, and the fire was confined to its place of origin.