A team of archaeologists led by Cóilín Ó Drisceoil of Kilkenny Archaeology is currently excavating at St. Mary's in advance of the new museum being constructed. The church, built by William and Isabella Marshal in the early 1200s, was the chief burial place for Kilkenny's citizens for a period of around 700 years and it is famous for its collection of medieval and early modern funerary monuments. Inside the church the excavations are revealing startling and internationally significant new discoveries on a daily basis - a suite of previously unknown finely carved stone burial monuments, private family chapels, burial vaults with their coffins largely intact and a large collection of artefacts - all preserved intact underneath a clay floor that was raised above them in the eighteenth century.

Rothe Chapel of Michael the Archangel 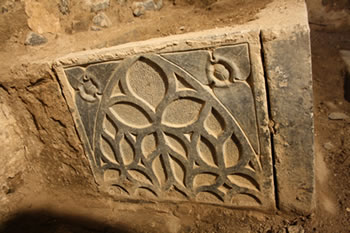 Side panel of Rothe tomb

Rothe family wills refer to the north transept (the former monuments room) of St. Mary's as their private chapel and final resting place, which they dedicated to St. Michael the Archangel. Excavations have revealed a series of new perfectly-intact chest-tombs and graveslabs with exquisite carvings and a magnificent double-effigy from around the year 1300. Beneath the floor of the chapel are burial vaults within which are Rothe coffins in a good state of preservation.

Tomb of Robert Rothe 1585 being revealed by Philip Kenny

Curious discoveries within the chapel were Roman coins from the second century AD and two guns that had been hidden beside one of the tombs.

The interior of the church is a honeycomb of burial vaults, many of which appear to be connected with other great Kilkenny merchant families: the Archers in the south transept, the Shees and Knaresboroughs in the chancel. Some of the larger burial vaults contain the remains of many individuals, some vaults have only a small number of coffins. Their coffins were made from oak and pine and finely executed with studwork and velvet.

Archaeologists working in the south transept

In the nave arcade a rare example of a medieval, probably 13th-14th century, wall painting has been discovered and conserved.

A large bell tower stood between 1343 and 1819 at the north-west end of the medieval church. This was where Kilkenny Corporation met regularly during the medieval period. Its foundations and some of its floor was revealed and recorded by the archaeologists.

The discoveries at St. Mary's are unique in Ireland and they provide an important opportunity to learn a great deal about death in medieval and early modern Kilkenny. Archaeological excavations are still ongoing and no doubt more discoveries will be made. The archaeologists are currently working with a team of scientists and specialists to retrieve as much information as possible from the site. None of the new archaeological finds will be disturbed by the new museum being constructed and it is envisaged that they will be displayed as part of the new facility.