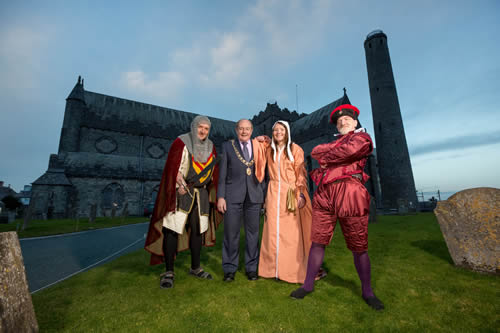 The branding has been unveiled for one of the most exciting new tourist developments in the country, Ireland's Medieval Mile in the heart of Kilkenny City.

Ireland's Medieval Mile will stretch from Kilkenny Castle to St Canice's Cathedral, including everything in between, and is aimed at "unlocking the past" and positioning the historic city as a "must see" destination for domestic and overseas visitors.

Launching the new brand in St. Canice's Cathedral, Major of Kilkenny Martin Brett said "Irelands Medieval Mile will build on the tourism successes of the city further promote the development of our rich cultural and heritage."

The objective of the brand is to influence visitor movement in the city, improve the level of engagement and encourage tour operators to put it on their itineraries. 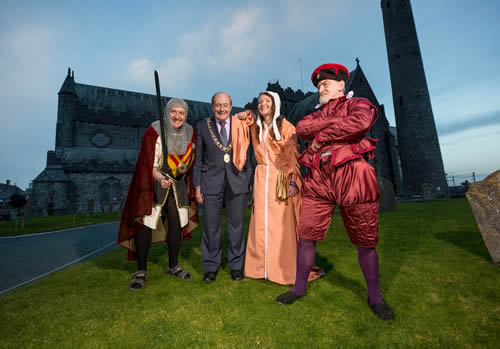 It was also announced last night that Kilkenny is to host Irelands first Medieval Week in the city from March 28th - April 6th , rolling back the centuries to celebrate its unique and rich history.

Visitors are invited to step back in time and join in epic events including royal feasts, tales of knights, workshops, historic tours and a raucous medieval market.
The city and county will be transformed into a medieval hotspot with locals, business owners, and those working in hotels, bars and restaurants being encouraged to get into the spirit by dressing up in medieval costume.

The Medieval Week, being coordinated by Kilkenny Tourism, is the first of its type in Ireland. It coincides with the development of Ireland's Medieval Mile.
The highlights on Ireland's Medieval Mile include Kilkenny Castle, Kilkenny Design and the National Craft Gallery, St. Mary's Church and graveyard, Graces Castle, Rothe House, The Tholsel the Smithwicks Experience, the Black Abbey, The Watergate Theatre, Kyteler'a Inn and St. Canice'sCathedral and Round Tower.

According to Failte Ireland the goal is to increase the amount of time visitors stay in Kilkenny and their spend, and for the city to be not just recognised for the castle but also for all the other great heritage and cultural offerings along and around the Medieval Mile, both day and night.

Gary Breen, Head of Operations, Fáilte Ireland, said at the launch of the brand: "The Medieval Mile brand launch is a major milestone in the future development of Kilkenny as a cultural tourism destination. The brand, which is supported by a substantial capital investment programme, is designed to position Kilkenny as an historic centre of international stature and in doing so attract to the south east a large slice of the international cultural tourism market."

The aim is to present Kilkenny as an exciting, city centre boasting historic buildings, slipways and streets in a cosmopolitan setting surrounded by creative, entertaining people who want visitors to feel totally immersed. 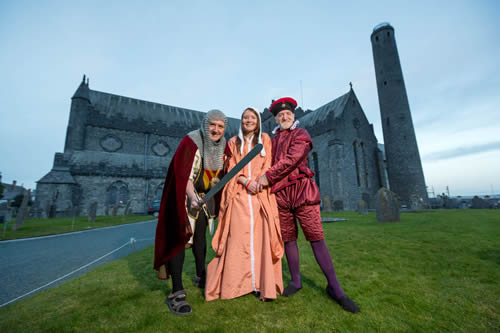 The brand will bring the appeal of Kilkenny to a new level, making it easier and more compelling for prospective visitors to consider the city as a must see part of their visit.

It will be used on promotional literature, display stands, and websites. The brand is supported by Kilkenny Tourism, Kilkenny Chamber of Commerce, city retailers and Kilkenny festivals who will all use it on their promotional material.
All tourism and business owners in the city are being encouraged to support the brand, and those on the mile are being asked to adopt it within their businesses. A brand toolkit was developed by Designworks and to help business build the new brand into their communications.

Tourism Ireland has identified the "culturally curious" market segment as having high potential and Irelands Medieval Mile will seize on the opportunities that have been identified in that segment.

Kilkenny is steeped in rich culture and history, and is already one of Ireland's top tourist centres. Ireland's Medieval Mile will reinforce the city and the south east as a major tourism hub.