Funding for the scheme is provided under the National Development Plan, 2007-2013, with part funding by the European Union from the Trans-European Transport Networks Budget. 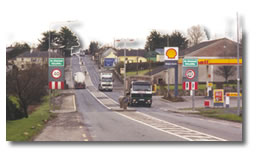 An Bord Pleanala approved the Compulsory Purchase Orders and the Environmental Impact Statement for the M8/N8 Cullahill to Cashel Road (part of the Dublin to Cork Road) in December 2004. Notice to Treat has been served on all affected land and property owners.

The tender process for the appointment of the main contractor for construction of the scheme has commenced. Expression of interest has been received from seven contractors. Following an assessment of the submissions, this will be reduced to a short-list of five shortly. It is expected that a contractor will be appointed in September 2006 with a view to commence work on site in February 2007. It is expected that the road would open at the end of 2009.